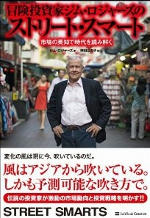 【原文】
Rogers Says Dollar Will Rally, Too Many Are Bearish (Update2)

May 8 (Bloomberg) -- Jim Rogers, chairman of Rogers Holdings, said too many investors are bearish on the U.S. dollar and the currency will have a ``nice'' rally.

The dollar has declined 4.9 percent against the euro this year as widening credit-market losses and slowing economic growth prompted the Federal Reserve to cut interest rates to head off a recession. Since Rogers said in an interview on April 27 that he expected a dollar rally ``about now,'' the currency has climbed 2 percent.

``I expect a nice rally in the American dollar because so many have been bearish on the American dollar including me,'' Rogers said at the launch of the Barclays Global Agriculture Delta Fund in Singapore today. ``America is also a huge producer of agriculture and if I'm right about agriculture prices, which I think will go up a lot, that's going to help America compared to those countries which don't have agriculture.''

Rogers said in last month's interview that he was hoping the dollar rally would last a year, which would allow him to sell all of his U.S. currency. Today, he said he holds the currencies of commodity producing nations of Australia, New Zealand and Canada, which he expects ``to do well.''

The Australian dollar fell 0.5 percent from late Asian trading to 94.2 U.S. cents as investors cut purchases of higher yielding currencies funded in Japanese yen. In so-called carry trades, investors get funds in a country with low borrowing costs and invest in one with higher interest rates, earning the spread between the two.

``People who produce commodities when commodities are going through the roof will do better all other things being equal,'' said Rogers, Rogers, who co-founded the Quantum fund with George Soros in the 1970s and correctly predicted the start of the commodities boom in 1999.

``The New Zealand and Australian dollar may get hurt if carry trades reverse,'' he said. I admit that I've also been buying the yen, but I'm not planning to sell my Australian dollars as they have a great future.''

He added that the dollar is losing its status as the world's reserve currency and is increasingly being replaced by the euro, the yen and sterling. On a 20-year outlook, the Chinese yuan is a likely replacement.

``But the only thing I can see on the horizon which can replace the dollar is the renminbi, which is an absurd statement as it is a blocked currency, but this is a longer term horizon, maybe in 20 years or so,'' he said. ``It cannot be the euro or the yen or the Swiss Franc.''

Rogers expects U.S. Treasuries to decline due to inflationary pressures.

``I have sold long-term U.S. government bonds,'' he said. ``If the same thing happens as it always happens in inflationary times, then rates are going much, much higher, especially long- term rates.''

Rogers said central banks may be effective in manipulating short-term interest rates ``but they can't do much with long term rates.''

≪ Back  │HOME│  Next ≫